Choosing lacquer as a medium of expression means setting limits to be exceeded.

At 20 years old, the doors of the Decorative Arts School in Paris opened wide before me. One day I spoke with another student who told me about her exchange program with the Fine Arts School of Hanoi in which she had studied lacquer. I felt drawn to an idea: to go to another continent and study a mysterious painting technique…

After I graduated in 1995, I went to India for six months to work in Mother Theresa’s hospice. It was a voyage of initiation. I took many photos and made many drawings of women who had been disfigured by life. I was 25 years old and not the same person when I came home.

In Paris I began to work as a fashion stylist assistant: The contrast with India could not have been greater! It had no relation to my passion and I was not producing artistically. At that time I met my husband and in 1999 we both left the world of advertising and closed our freelance activities. We set out on a trip overland from Paris to Hanoi. I drank up the world. On a crumpled piece of paper I had the telephone number of a lacquer artist in Hanoi.

As soon as I arrived I began my apprenticeship. I discovered that in choosing lacquer I was imposing limits on myself that I had to go beyond. Working with a precious material was an added pleasure, for vegetal lacquer is alive, rare, and nearly eternal. I quickly began experimenting with lacquer in my first workshop while taking lessons with different masters. I slowly stopped working in other mediums. After four years in Hanoi, we decided to move to Canada.

In Toronto I set up a bilingual workshop with an artist from Quebec. We wanted to create a space where we could work, give classes and exhibit our work. Unfortunately, the energy needed to attract students and make a living ate into our needs as artists. My husband and I decided to begin our lives afresh in Vientiane, the quiet and dusty Lao capital.

In 2010 I slowly began producing again and had solo exhibitions in Vientiane, Toronto and in Siem Reap where I was invited in August of 2018 to participate in the Asia Lacquer Exchange Program.

I was proud to be recognized by my peers and admitted into that group of stubborn individualists who are still using vegetal lacquer in a world where synthetic products and fast results have the upper hand.

I have acquired a rare savoir-faire and am a link in a thousand-year old tradition.

I share the world that touches me with my paintings which I patiently produce in my studio overlooking a small lake whose light changes hour by hour.

Asia has become my home once again and it is here that I am developing my artistic career. 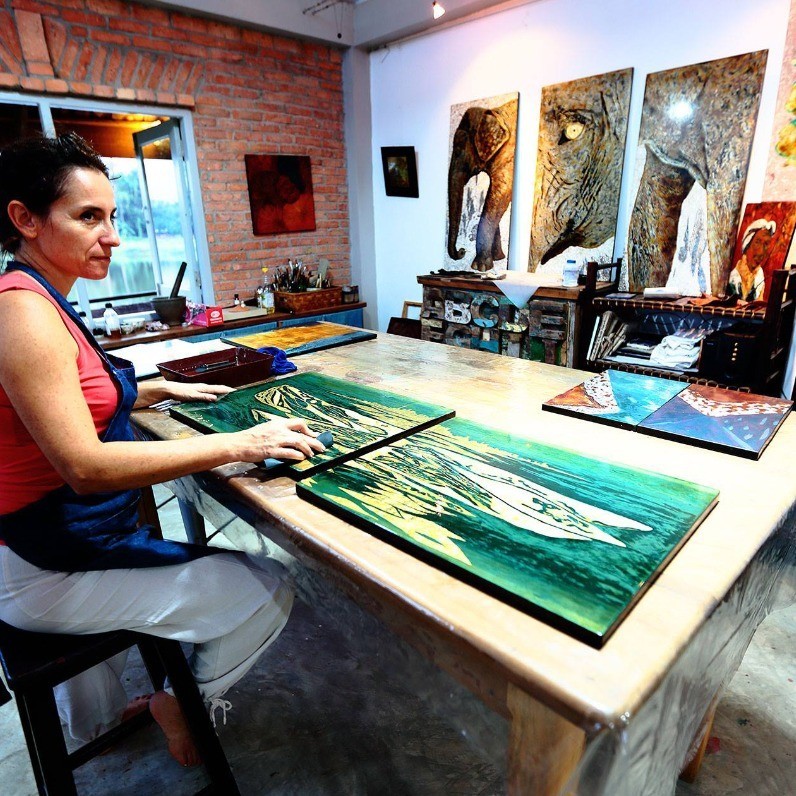 The artist at work

2017 Back to Toronto (Part 2) at the Alliance Française Toronto, ON, Canada

2016 Back to Toronto (Part 1) at the Institut Français Vientiane, Laos